Yesterday was an exciting day for me, as it marked the beginning of another new journey as far as my creative side was concerned. I had the first script read-through of my latest one-act play, Intoxicated, with my cast. 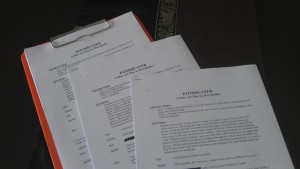 Intoxicated isn’t actually all that new. It was first completed at least four years ago, but it was never staged. After staging All I Want here in Singapore in August 2011, I wanted to put up another one-act play. Intoxicated was the most polished out of the remaining completed scripts, so that was the most logical choice to work on.

The first thing that needed to be done was rewrite it. The original play felt like it was written a lifetime ago, and after a whole bunch of new experiences, it was time not just for myself but for the characters and situations in the play to grow up a little. The most major change was that the characters went from being college students to working adults. Lines had to be tweaked here and there, and even some names were changed. The overall core of the play was still the same, though.

Next was casting. With such a depth of talent to be found at work, the problem wasn’t finding people to play the parts. It was figuring out who would be a good fit for the play, who I thought would work well together, etc. It was tough, and I honestly wish I could cast pretty much everyone I work with (gotta write more, then). To make a long story short, I picked two people, sent them the script, and happily, both agreed to do it. I’m proud to present the stars of the show, Earl Mallari and Gareth Prosser: 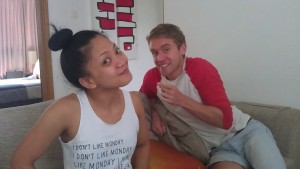 Yesterday marked the official start of the production process. Like All I Want last year, I’ll be writing and directing this one. Unlike All I Want, I don’t have previous productions to refer to, so this is all new territory. But before we could start actually staging the play, I wanted to make sure the script was up to my standards. Hence, the first read-through. It was also be a great way to get my cast together and see whether or not this would actually work. I’m happy to say that Earl and Gareth are more than up to the task ahead.

As for the script, while a lot of things worked, the read-through also exposed some flaws, which I’ll be addressing in the rewrite. We also came up with a couple of ideas that could work. So now comes the rewriting and editing stage, and maybe after a few more read-throughs, we’ll have the final working script.

As it stands, it feels good to be working on something new! I’m excited about this little project, and when we finally stage it, I hope you’ll be there in the audience as excited as I am.