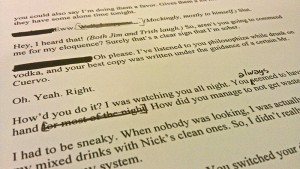 Writing a play, at least in my experience, is a collaborative effort. Sure, it’s my name that you’ll find beside the Playwright credit of whatever play I write, but the end product is more often than not the result of various consultations and script readings with numerous people. I, of course, have final editorial say on what goes in the script, but it’s good to have other eyes and opinions to help me along.

As I mentioned previously, “Intoxicated” isn’t new material. It has never been staged, but it was completed a few years ago… or at least, a version of it was completed a few years ago. Indeed, when I last did a reading of the script (back in Manila), the general consensus was that it was stage-ready. Cut to Singapore, a couple of years later. In search of something new to stage, I dug out the script and decided it needed an update.

Before we even started with the first read-through, I sent the script to one of my friends so he could read it with fresh eyes and give me his comments. He came back to me with a number of comments; some were useful, while others were to be kept in the back of my mind when we did the reading.

Probably more helpful for me as a writer was the read-through. The success of this play lies mainly in its dialogue. It may look good on paper and in my head, but it’s a totally different experience actually hearing and listening to how it sounds. When I had my cast read the play twice, it was easier to notice things like clunky sentence construction, unnecessarily wordy dialogue, and annoying repetition of words. One could perhaps get away with these on the written page, but as it is meant to be a staged production, it needed to be fixed. 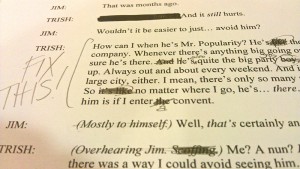 Following that session, it was time for some much needed rewriting. My best friends were a black marker and a pencil. Some bits of dialogue were reworded or deleted entirely. A few lines were added, some spurred on by suggestions from my cast. When that was done, it was time for a second read-through session. The play was tighter and flowed better, and only needed a couple of minor edits. One final read-through last Sunday sealed the deal.

final read-through with MacBooks: because printed scripts are too mainstream

So for now, I’m done writing and rewriting “Intoxicated.” I’m now satisfied with it enough to move on to the next phase of production: Staging.

← “Intoxicated” Production Diaries #01: The First Read-Through
“Intoxicated”: A New Play This May 2012 →