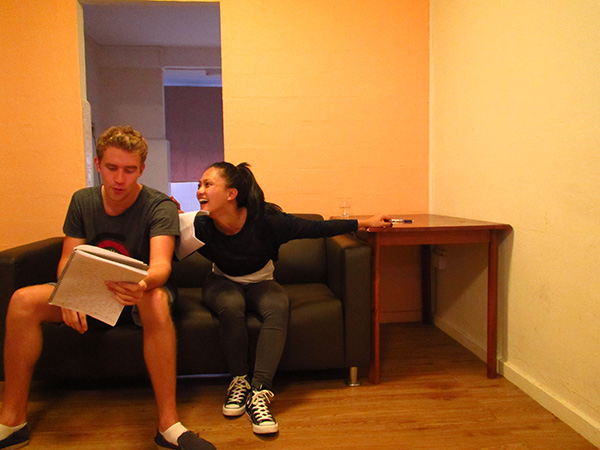 After finally completing the script, it was time to take off my Playwright hat and put on my Director hat. It’s a weird feeling. On one hand, there’s a particular image that I have in my head as I’m writing the play; on the other hand, I have to completely ignore all that while directing it. The best way I’ve found to be able to deal with this disconnect is to trust my actors.

Perhaps it’s because I’ve had onstage experience, but I’ve found that, generally speaking, an actor’s instinct on how to play a part shouldn’t be ignored. This became more clear to me when my actors and I had a couple of sessions where all we did was talk about their characters. We went through everything from the little, seemingly insignificant details to the major character traits and decisions made in the play. It was a fascinating and enlightening experience. My actors Earl and Gareth provided a lot of insight into their characters based on how they read into the script. Some of it matched what I had in my head, but some things, I never even thought about or considered.

By the end, we’d taken the play into a completely different place. The input from my actors helped elevate the play to another level. It was a fantastic experience, and definitely got me more excited about working with Earl and Gareth. I knew that they were both thinking actors, that they could put something interesting and special into their characters. Gareth even brought up writing a character bio without my prompting. It definitely showed me that I could trust my actors with this material. The play and its characters were definitely in capable hands.

It was clear that the “character-building” sessions did their job. The next read-through we did was a lot more informed, a lot more exciting, and a lot more interesting as a result. The play was definitely shaping up.