LAST TWO SHOWS of “Take Me Out” at DBS Arts Centre!

January 14, 2014 · by Ren · in promotions, Singapore, Take Me Out, theater, Tim Garner Productions

We’re now down to the LAST TWO SHOWS of “Take Me Out” from Tim Garner Productions at our current home at the DBS Arts Centre: Wednesday the 15th and Thursday the 16th. Tickets are available at SISTIC.

After we wrap up our run at the DBS Arts Centre, we move into the Alliance Francaise Theatre on Saturday the 18th, and we’re running there until 31 January. “Take Me Out” stars  Juan Jackson as Darren Lemming, Hayden Tee as Mason Marzac, Tim Garner as Kippy Sunderstrom, Chris Bucko as Shane Mungitt, Paul Lucas as Skipper, Seth Adams as Toddy Koovitz, Kynan Francis as Jason Chenier, Johnny James as Davey Battle, Ren Robles as Rodriguez, Jejie Esguerra as Martinez, and Hiro Mizuhara as Takeshi Kawabata. It is directed by Paul Lucas. 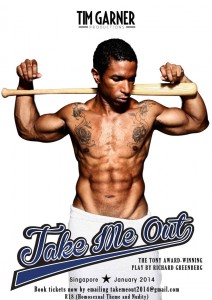