Watch ALL I WANT at the SPORE Art Salon on 29 August! 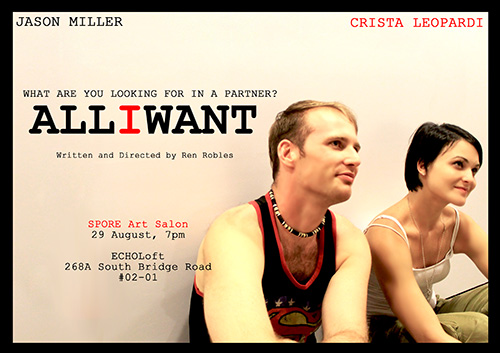 After two successful stagings in Manila in 2008, ALL I WANT makes its Singapore debut at this month’s SPORE Art Salon. Written and directed by Ren Robles, this one-act romantic comedy follows Vince (Jason Miller) and Amy (Crista Leopardi) as two old friends who try to answer the age-old question, “What are you looking for in a partner?”

SPORE Art Salon is a non-profit initiative created for visual artists to meet, mingle, inspire, and share with performing artists. During the event, drawing sessions alternate with live models, and performances from musicians, contortionists, poets, dancers, actors and more. We also feature works of, and demonstrations by visual artists, individually or collaboratively. The event is modeled after world famous Giles Larrain’s Art Salon in NYC.

The 9th edition will be on August 29, 7pm at ECHOLoft (268A South Bridge Road #02-01, corner of Smith Street & South Bridge Road). Aside from ALL I WANT, other acts at this month’s SPORE Art Salon are filmmaker Jow Zhi Wei (whose short film WAITING will be screened at 7.30pm), host Becca D’Bus, acoustic trio The Russian Dolls, and performance poet Stephanie Dogfoot.

There is a minimum donation of $15/person at the door, and proceeds will benefit ECHOLoft and its featured artists. There will be alcoholic drinks for sale, and a small spread of tapas.

REN ROBLES (Playwright and Director) finished with a degree in Psychology but pursues his passions in theatre as a veteran of Repertory Philippines Children’s Theatre as well as the Asian premiere of the stage version of HIGH SCHOOL MUSICAL directed by Chari Arespacochaga for Ateneo Blue Repertory in Manila.

CRISTA LEOPARDI (Amy; BS in Dance Management) is mostly a dancer but proudly credits roles in CHILDREN OF EDEN (Ensemble), BEND (an Original staging), and ANNIE GET YOUR GUN (Winnie).

ACE BIGCAS is Stage Manager for this production.

Photography and poster design is by ACE PATRICK DEQUINA.

← Coming in Two Weeks: All I Want… SINGAPORE!
All I Want SG – Director’s Notes →